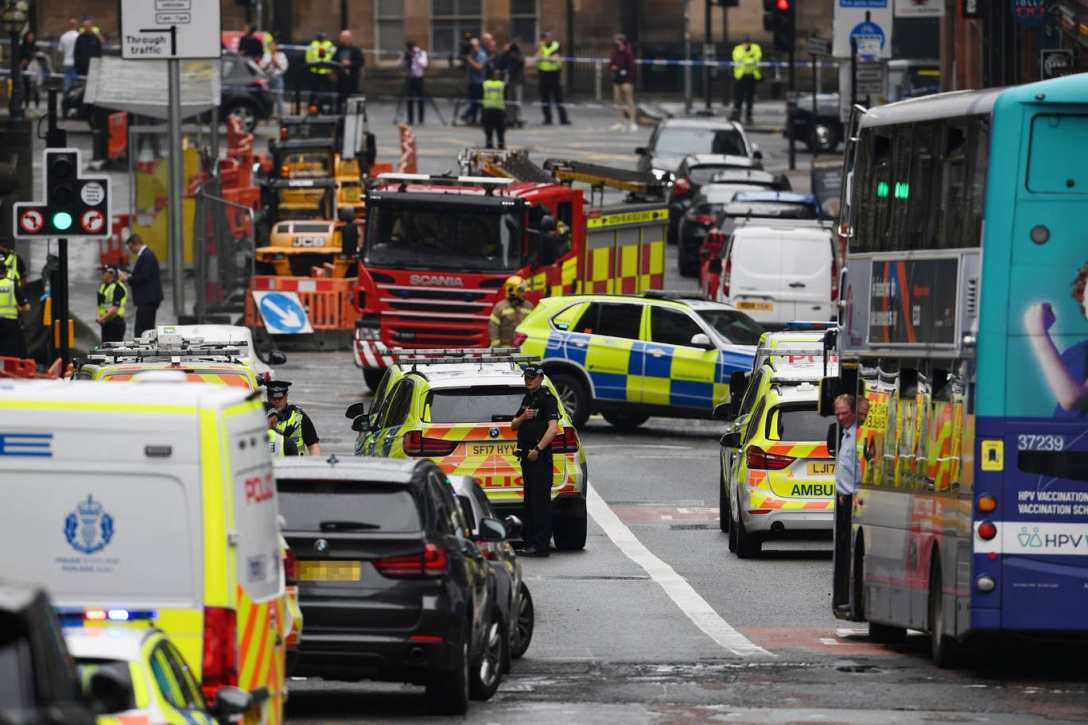 Published by The Independent.

Activists and campaigners in Glasgow have warned of a “toxic environment” inside hotels used to temporarily house asylum seekers during the coronavirus pandemic, after six people were injured in a knife attack on Friday.

Hundreds of refugees and asylum seekers were moved from their self-contained accommodation into six hotels across Glasgow in early April at the start of the lockdown by Mears, a company contracted by the Home Office to provide housing for asylum seekers in Scotland.

On Friday the Park Inn, one of the hotels in Glasgow being used by Mears, was the scene of an unprovoked knife attack, where a man stabbed three residents, two staff and a police officer who responded to the chaos.

All six remain in hospital and the suspect was shot dead by armed officers shortly afterwards.

But volunteers working with refugees in the city have described the situation inside the hotels as a tinderbox and accused Mears of presiding over a “disaster”.

Shafiq Mohammed, who runs the Asylum Seekers Housing Project in the city and knows residents placed in the Park Inn, said the company had created a “toxic environment where people are clearly going to be affected”.

Squeezing hundreds of people, mostly young men, many with mental health issues or post traumatic stress disorder, into hotels and cooping them up with nothing to do for three months was a recipe for disaster, he argued.

One charity worker in Glasgow, who did not want to speak on the record, told The Independent they had heard from residents in the Park Inn that the suspect in the knife attack had already been the subject of complaints over his aggressive and erratic behaviour, but despite evidence of mental health problems little action was taken.

According to the BBC, the suspect had told another resident in the hotel he planned to hurt people the day before he launched his sudden stabbing spree. “I want to attack them, they are against me, they hate,” an eyewitness reported the man saying.

ome of the residents came from countries in conflict with each other, Mr Mohammed said, while others were offered food which was culturally inappropriate, he had been told. An allowance of £5.39 a day which asylum seekers used to be given each day for food was taken away when they were moved into hotels.

Ako Zada, who also campaigns for refugees in Scotland, said the “dehumanising” and “humiliating” conditions had left some residents depressed.

“I was told that the hotel had been warned that one man had been pushed over the edge and was a great danger to staff,” he told the Daily Record. “We have been aware of very high tensions during lockdown.”

Robina Qureshi, director of Positive Action in Housing which also works with refugee housing, said the tragedy in Glasgow “underlines our concerns about the conditions in which vulnerable asylum seekers are forced to live”.

“Many asylum seekers complained of ‘hotel detention’, of being denied urgent medical attention, of being told to stay in their rooms, of insanitary conditions and deteriorating mental health,” she added, speaking to The Independent.

“Since the pandemic the numbers of people reporting to our charity about depression, suicidal thoughts and worries about money and complete isolation has rocketed. People are unable to socially distance and live in fear.”

Long before the incident on Friday, Mr Mohammed said he and colleagues had heard that the atmosphere inside the hotels was becoming “more fraught and tense” and feared confrontations could break out.

Mohammad Asif, chair of the Afghan Human Rights Foundation charity in Scotland, was on the phone with a resident inside the Park Inn just moments after the attack had taken place.

“We hear horrible stories, especially in this difficult coronavirus time,” he told the BBC on Saturday morning.

“It was so crowded, people have to use the same bathroom, the same toilet and you have the media telling people coronavirus is so dangerous. People were really scared.”

Mears’s handling of the lockdown has earlier come under scrutiny after an asylum seeker died in a Glasgow hotel in May. Mr Mohammed said it seemed to him the firm was driven primarily by turning a profit out of housing vulnerable people.

“It seems [Mears’s] primary motivation is to make a profit. The general approach is minimalist – let’s see what we can get away with…

“We hope there is an open, fair, transparent investigation into the circumstances leading up to this gentlemen doing this horrendous act,” he added.

A spokesperson for Mears referred a request to comment to the Home Office, although they also reiterated a statement from May after the earlier death.

In that statement, the company said it had to move asylum seekers not yet in settled accommodation into “good quality hotel accommodation” to reduce the journeys made under lockdown by their staff to and from multiple locations. The daily allowance was stopped because the hotels offered a full board service.

“In cases where hotel accommodation was not suitable for particular service users, due to health or other welfare considerations, they have remained in alternative accommodation,” the statement said.

A spokesperson for the Home Office said: “Police Scotland are investigating an incident at West George Street in Glasgow, and it would be inappropriate to comment further at this time.”