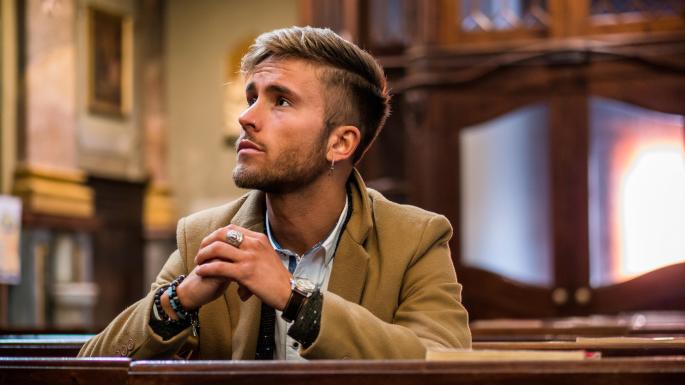 Published by The Times.

Almost everything about services at St Bartholomew the Great church is old-fashioned. Purple-robed choristers process through clouds of pungent incense. The priest, the Rev Marcus Walker, brandishes an ornate golden King James Bible above his head before reading from the 1611 text. The liturgy is a mixture of 16th-century prose and sung Latin. The medieval priory church, which sits a stone’s throw from the central London hospital of the same name, was founded in 1123.

However, the congregation watching on at a recent service were younger than most would expect; at least a quarter were under 35. They had come to observe a handful of men and women, mostly in their late twenties, be baptised into the Anglican faith. Afterwards the millennials gathered inside the stone cloisters to explain why the archaic drama of traditional worship still appealed.

Several said they relished the connection to past generations of believers through reciting the Book of Common Prayer, which English Christians have been using since 1549. Others valued the beauty and history of the choral music and Shakespearean liturgy. They were not simply “young fogeys”, they insisted. Three of the group had separately found their way to St Bartholomew’s after becoming friendly with Walker on Twitter.

For years most of those longing for revival within the church have placed their hopes in the energetic evangelical wing exemplified by megachurches such as Holy Trinity Brompton (HTB) in west London. However, the baptisms at St Bartholomew’s were part of what some regard as a similar resurgence among the young within the Church of England’s Catholic wing.

Westcott House, a traditionalist theological college in Cambridge, has welcomed a steady stream of ordinands in their twenties and thirties. The two churches in the region sending the most young ordinands were Anglo-Catholic, the Rev Anna Matthews, a local vicar and diocesan official, said. Her church has produced six candidates in the past four years.

Some millennials raised in the more informal evangelical tradition are crossing over to the older style of worship. They describe the lure of a Christianity that does not aspire to be relevant or fashionable. The Rev Fergus Butler-Gallie, a 27-year-old priest in Liverpool, said churches did not need to “pretend to be your nightclub” to appeal to the young. “It can be church and have an air of mystery.”

Since the 1960s the Church of England has been writing new liturgies in contemporary language. However, the Book of Common Prayer (BCP) is resurgent. The Prayer Book Society, which campaigns in favour of the 16th-century text, enjoyed a 40 per cent year-on-year rise in membership in 2017. Its competition for schoolchildren to recite prayers from the BCP by memory attracts hundreds of entrants. The Rt Rev Lord Chartres, the former Bishop of London, reflected recently how those who found the normal worship of the church “banal” were drawn to the BCP: “There is now a younger generation who are realising afresh the importance of complementing the argot of Twitter and SMS with the majesty of Cranmer.”

Across the church, expressions of faith thought to be old-fashioned are seeing green shoots of growth. Attendance at cathedral services has risen 17 per cent in the decade to 2016 and there has been a revival in monasticism among the young. Each year hundreds of 20 to 35-year-olds apply to join the Community of St Anselm, an ascetic gap-year programme run by the Archbishop of Canterbury. Those accepted wear simple white robes with wooden crosses and devote themselves to prayer, silent retreat and charity work.

Church plants, which were previously dominated by evangelical communities, can now also be found in the Anglo-Catholic wing of the church. One recently launched congregation meets on a barge, moored on a canal in the trendy east London district of Hackney Wick and intersperses mornings of millennial meditation with traditional morning prayer services.

It is possible to detect a streak of contrariness among the young adults throwing themselves into traditional Anglicanism. Some of those at St Bartholomew’s — including Darren Grimes, 24, a prominent Brexit activist — seemed to relish thumbing their noses at a society that assumed Anglo-Catholic Christianity was too ancient and too highbrow for their generation to appreciate.

There are also a fair number of “young fogeys” among the millennials who are returning to church. Their interest seems driven as much by traditionalism for its own sake as by faith. One of the recently baptised at St Bartholomew’s said that he felt a “duty” to preserve the cultural heritage and patrimony of established Christianity, “regardless of the theology”.

Another compared the CofE’s predicament to golf and sailing clubs, and posited that churches, as with clubs, that “dumb down” and ditch dress codes and formalities to attract younger members were dying out.

Yet there are almost certainly not enough contrary cultural conservatives among Britain’s youth to reverse the church’s decades of decline alone. Grimes volunteered the latest figures: only 2 per cent of the country’s millennials consider themselves Anglicans. “The stats are pretty horrifying, let’s be honest,” he said. “But they have said that the church is dead before . . . and it’s still here.”