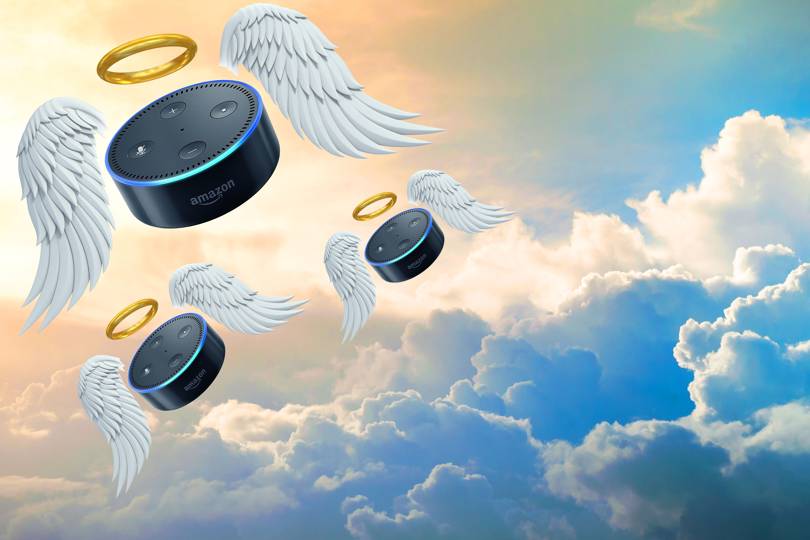 From Instagram to Alexa, the new digital evangelists are using technology to spread the word of God. But is anyone listening?

On a chilly Saturday in February, about sixty Christians packed into a church hall in Shoreditch, east London. But they hadn’t come to discuss theology or argue about women bishops. They had come to code. From morning to evening, the delegates at the first Church of England Digital Labs batted around ideas, sketched out wireframes, discussed user interfaces and began building websites, apps, and social media campaigns. A panel of judges then picked out the two best ideas, which will be funded, fully developed and released by the Church of England later this year.

The mastermind behind this unlikely Christian hackathon was Adrian Harris, the head of digital for the Church of England. A mild-mannered man in his thirties, Harris was happily making a career for himself in digital communications – working at Bupa, Tesco, and the Conservative Party – when he was recruited by the Church of England in 2016.

His appointment was effectively an admission by the church that it had fallen badly behind on digital media and new technologies. “It was half of a junior staff members’ time,” he says. “It was a bare bones operation – I think the web budget was ten grand a year. It was neglected.”

Neglected, but not unusually so. In truth, the sorry state of the Church of England’s digital efforts was common to how most religions have had struggled to come to terms with the web.

In the 1990s, as the web began to take off, churches were awkward and unsure about “cyberspace”. The attitude was neatly summed up in a 1999 report for the General Synod, the Church of England’s parliament. The document, which took a group of academics three years to produce, was called, apparently entirely unironically, “Cybernauts Awake!”.

While earnest and largely quite positive about the internet, the report also underlined the gap between church institutions feeling their way around this new space and ordinary Christians who were already getting involved wholeheartedly. Notably, it failed to mention Anglican.org, a website and central domain hub for Anglican churches across the world, which had been started as early as 1994 when a few enterprising souls quickly bought up the anglican.org domain.

But if mainstream churches were lagging behind, believers were all in. A famous Time magazine cover story from 1996, headlined “Jesus Online”, examined how the fledgling internet was already shaping faith for a new generation.

In 1998 the well-known evangelical pastor John Piper moved his collection of sermons and books online, and the portal – DesiringGod.org – quickly developed into a library of 12,000 resources, including “Ask Pastor John” podcasts and “Look at the book” videos where Christians from every corner of the world can follow him annotating a Bible passage live. The website now boasts 3.5 million monthly users and has a paid staff of more than 40.

Into the new millennium the experimentation continued. One group created Church of Fools, an online congregation where anyone could log in, create an avatar and then take their seat in a virtual pew and “watch” a service in blocky, poorly-rendered 3D animation.

A junior staffer at an American megachurch, Life.Church in Oklahoma, created YouVersion, the only Bible app that was live on the very first day of the App Store in 2008. Today, YouVersion says the app has been installed 321 million times.

Harris is frank about how necessary the Church of England’s recent investment into digital technology was. “There was this real realisation that we had a hugely out of date web presence,” he said. Comparing other faith group’s slick tech offer to the Church of England’s own websites – non-mobile-friendly, more than seven years old and full of impenetrable jargon – made the church’s leadership realise just how far behind they had fallen.

Now halfway through his three-year digital revival project, Harris and his team have revamped all four main national Church of England websites, including the popular A Church Near You. The site, which used to just offer basic details about the nearest church once you put in a postcode, was still pulling in 13 million hits a year, Harris said. Now, the redesigned site not only connects people with their parish church but also has links for those seeking a church wedding or funeral and can even be used by parishes to create their own simple websites free of charge and without any computer know-how.

Beyond the websites, Harris has also introduced comprehensive social media campaigns around key festivals such as Christmas and Easter to capitalise on the public interest in Christianity and encourage non-believers to find a local parish church service to go to. “In another organisation I used to work for it would be described as however, whenever, wherever. That’s where the church is,” he says. “If someone wants to receive a short 160-character text for Lent you can sign up for that. If you want the longer version you can get it via email, or a shorter version through Instagram, or a more reflective message through Facebook.”

The idea for Digital Labs was based around connecting the Church of England to the thriving Christian tech world. “There’s all these ideas out there; Christians who work in the creative world, the advertising world, the coding world, and have tons of ideas but had no mechanism of getting anything built and no budget,” he said. He did not have to look far to find people the Church of England could work with

Kingdom Code, who describe themselves as “technologists making a dent for the kingdom” of God, have been running their own 24-hour hackathons for several years. One of their founders, James Doc, helped facilitate the digital labs event for the Church of England.

He said that there had sometimes been a hesitance within the church to embrace the tech revolution of recent decades. “I think technology is pretty intimidating. It is moving so very quickly. The response has been let’s wait and see what happens.”

Doc works for an independent evangelical congregation on London’s Southbank with the made-up job title of digital ministry developer. While each week is different, his role sees him not only oversee the church’s websites but also create apps to encourage congregants to study the Bible, mentor churchgoers who work in London’s tech sector and urge other churches to consider how technology might aid their mission.

His hope was that Christian techies would start to think about how they could use their skills for the gospel. “A couple of weeks ago I was sitting down with a Facebook employee and talking about what does it look like for her faith to make an influence on the products that they were making,” he said.

Read the full feature at WIRED